Posted on September 4, 2013 by nickmichaelsorrell

Welcome to BSA Troop 364’s website. We would like you to look around the website. We meet at 109 Weatherly Rd Huntsville, AL every Wednesday at 7:00 pm. We are very active in the community and do monthly activities. Keep checking this website for reports and information about upcoming events.

The Troop 364 Open House is an event where troop 364 shows what boy scouting is really about. The open house is on Wednesday January 10th, at Lathum Church. The open house is open to cub scouts and boys interested in scouting. We will have four stations for the boys to go to. So come on over and see what we have to offer.

On Saturday August 12 Troop 364 assisted residents with the cleanup from the recent flooding in the neighborhood of Blossomwood. News crews from both WHNT and WAFF filmed the scouts in action.

The troop decided to try a new summer camp this June and the scouts enjoyed the week so much that the troop has already reserved a spot at Camp Skymont in 2018. The camp had excellent waterfront , shooting sports, cycling, and metal working programs. The outstanding efforts of the scouts and scoutmasters was recognized with top inspection scores throughout the week resulting in the troop earning the right to paint the golden skillet and receiving the “Coolest Gateway” award at the closing campfire. Pictures included are the Senior Patrol Leader receiving the award at the campfire, the “Coolest Gateway” award, the troop gateway, and the golden skillet,

Our Scout of the Year

RANK: First Class or above and a registered member of BSA Troop 364. SM may waive rank requirement.

2-Cooking – must have completed all of the actual meal cooking requirements.

4-Lifesaving — at least 50% of Scouts going on trip must have earned this MB for trips involving water activities.

PERSONAL: Must be at least 12 years of age and have shown willingness to follow directions, a habit of willingly helping others, and a desire to adopt the Scouting Spirit in daily life.

MEDICAL: Submit completed medical form by 30 days prior to the trip. Medical used for any high adventure type trip or Jamboree or Summer Camp trips acceptable.

FEES: Trip Fees must be paid in full by published deadline.

APPROVAL: Must have approval of Scoutmaster and Trip Leader. This will include evaluation of the Scout’s participation, teamwork and leadership in all previous troop activities.

EAGLES: Eagle Scouts are not required to earn the four merit badges stipulated above. However, they must hold the required MBs listed for the trip.

CANCELLATION: If the trip is not fully set (all arrangements made, full complement of Scouts, etc) by the specified date for the activity, the Scoutmaster will cancel the trip unless there are extremely extenuating circumstances.

On February 12-13, Troop 364 had a TLT at Camp Jackson. It was a great campout on which every scout who attended learned a great deal on leadership and had a lot of fun. The images below are of the two patrol flags made on the campout for TLT provisional patrols. 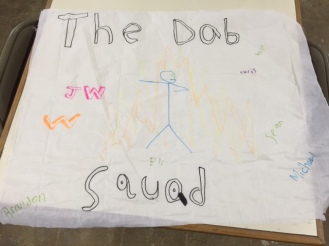 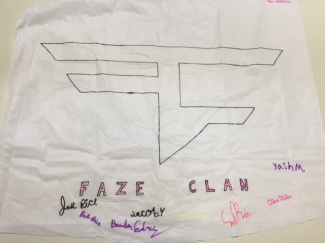 2015 was a busy year for troop 364. December 16 is our last meeting until January 6 when we resume regular meetings. Looking forward to 2016, our troop will be extremely active and busy. Right after meetings resume, on January 16-18, we will be camping near the Naval Air Museum and sleeping in the USS Alabama. Our open house is on January 27. We have many camping events coming in 2016, which are listed on the schedule page. Here’s to a great year.

Over Fall break this year, our troop went on a deep sea fishing trip:

On Saturday everybody got to the campsite at around 4:00 but we, the Clarks, were a bit late. We (mostly the adults) set up our tents and the boys played football and a bit of volleyball. The families there included the Mades, Niles, Clarks, Sorrells, Eli and Will Rice, Meyers, and the Sobczaks. After we all settled down, we all drove to Lulu’s, a good restaurant pretty close to the camp. They had a rope course that cost ten bucks. On it, you climbed on tight ropes and wooden planks high up in the air but if you fell the rope tied to your harness caught you. At the top there was a wooden plank that stuck out over the concrete. I didn’t go out on the plank but most of us did. In the restaurant, we got burgers, shrimp baskets, and sandwiches. The food was REALLY good and we saw the Ole Miss game (Eli wasn’t very happy that night). Ole Miss scored one touchdown though and the final score was 38-10 Florida. We went back to camp to see that some people had burned one of our raft logs and made s’mores and drank beer. We used the hot coals left by them to start a fire and went to bed at around 9:30

When we woke up, Tim (Alex’s brother) and I went down to the pier to fish for a while. We didn’t catch anything but had fun. In the morning, Jozef Sobzcak made pancakes, sausage, and hashbrowns for his First class requirements. After breakfast, Alex and I did devotions and we passed out song sheets while Mr. Mades played some songs on his guitar. After that, we used floor lashings to build a raft and some people got the lashings requirements done. At around 9:00, everybody went down to the tennis courts to play basketball, football, and tennis. Will, Danny, Alex, and I played PIG while some of the older scouts played tennis. We also checked out the pool and Will hopped in and got drenched by the cold water. We decided to go back to camp to eat lunch after playing in the sand. The Madeses and the Sorrells had pizza while everybody at the main camp had sandwiches. Jozef also made some ham and cheese wraps for his requirement. After lunch, the Niles, Madeses, Sorrells, and Meyers all went ziplining at some place nearby. Eli, Will, the Sobczaks and us, the Clarks all went to the beach. We played football, had sand fights, dug big holes in the sand, and invented a new game called 3-point. In 3-point, everybody starts out with 3 lives. When you throw a bad pass (with a ball) or miss a catch, you lose a life. The last person standing wins. After a couple hours, everybody from ziplining arrived at the beach right as Eli, Will, and I were leaving. While the zipliners stayed at the beach, we took showers and played some football at camp. When everybody got back at camp, we had some good dinner. The Clarks had steak and potatoes while the Meyers made burgers and hotdogs. Jozef cooked spaghetti with hand-made meatballs. His stove had many failures but after 3 hours, he made some really good spaghetti and almost everyone had a sample. After dinner, we had a campfire and sang some songs with Mr. Mades. After that, Eli took some scouts near the bath-house to play some Escape the Spotlight.

In the morning of Monday, we ate leftover mountain-man, sausage and pancakes. Some people ate cereal and Mrs. Sobczak cooked some bacon for everybody which was really nice of her. After breakfast, everyone went down to the beach all together. We dug holes, played more 3-point and football and searched the ocean floor. Eli used a butterfly net to catch a stingray, crab, and a jellyfish (not all at once though). Most of us ate sandwiches at the beach at the bath-house except for the Sobczaks, Meyers, Mades, and Sorrells. After lunch, most of the scouts stayed at the beach but Mr. Clark took me, Will Rice, and Alex to the pool, where we played tag, King of the Hill, and relaxed. My dad brought us some snacks and drinks while everybody else stayed at the beach. We went back to camp at around 4:00 and we took some showers. We played some more football and Will realized he “lost” his wallet. Mr. Sorrell took Will to Lulu’s to look for the wallet while Eli and the Clarks went to get pizza at a place called Rotolo’s. I got spaghetti, my parents got a pizza, and my sister got a pizza too. Eli got a large pizza and he brought leftovers back for Will. We also got breadsticks and buffalo wings as appetizers. When we got back to camp, Will hadn’t found his wallet and we played a lot of chess. The Sobczaks and the Meyer’s both left before Tuesday. Alex beat everybody at chess except for my dad who even gave Alex the queen to start off.

On Tuesday, we all woke up at about 6:00 and ate omelets and cereal. We arrived at the fishing place at around 7:00 and waited for the boat to be ready. The boat took about an hour to get the 11 miles out into the Gulf. We saw lots of jellyfish and some dolphins on the way out. When the boat dropped the anchor, it swayed a lot and some of us, including me, got seasick. Those of us in the bow of the ship got really wet but also caught the most fish. We all caught about 3 fish each and Will caught a 25 pound barracuda.

After the fishing part was done and the boat headed back to shore, the waves calmed down a lot and the sun came out. Mr. Sorrell gave us motion sickness pills and we all felt better. Will showed everybody the barracuda and we saw more jellyfish on the way back to the docks. They cut everybody’s fish and we put Will’s barracuda bits all in his cooler. After that, we drove back to camp and the Clarks and the two Rices started packing. We took down our family tent and Will got his tent down but we had to wait because Eli spent about half the time texting his girlfriend. Eventually, we all packed into the car and we stopped at a Five Guy’s which had some really good burgers. After that, we all took naps until around 10:00, when Mr. Rice came to pick up Will and Eli at the parking lot in Walmart. The Madeses, Sorrells, and Niles all stayed until Wednesday and I think they went to the beach one more time but I’m not quite sure because I wasn’t there.